Foods to eat and foods to avoid

Urinary system diseases usually occur when any of its functions are impaired or become infected.  The urinary system has several key functions, those being balancing water and electrolytes, excreting waste products such as drugs, urea and nitrogen, producing red blood cells when needed and of course urination.

The two most common urinary system diseases are:

Cystitis is an infection of the bladder, but the term is often used to cover a range of infections and irritations in the lower urinary system. It causes burning sensations during urination and a frequent need to urinate and is one of the most common urinary system diseases.

It is particularly common among females, as they have a shorter urethra than males and it is situated relatively close to their back passage. Therefore toilet hygiene is important to avoid bacteria from the back passage passing to the urethra.

Dietary changes can help prevent cystitis such as reducing acid forming proteins and grains and processed foods and sugar. Avoiding foods that contain sugars and yeast for tow weeks can help as these foods feed the bacteria that aggravate the condition.

It is also important to drink plenty of water to flush the system through. It goes without saying avoid sugar based drinks and alcohol as these only aggravate the condition.

It has been suggested that drinking a glass of cranberry juice daily is a good preventative measure as it prevents the bacteria from sticking to the walls of the urinary tract and therefore protects against the infection.  More cystitis dietary advice here. 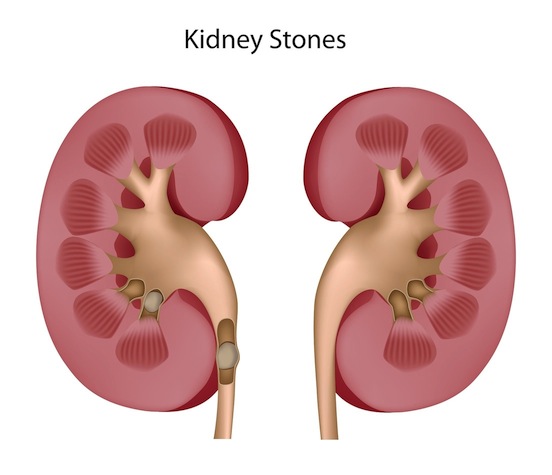 Kidney stones are stones that form in the kidney or the bladder and can vary in size from tiny microscopic fragments to huge stones that fill up much of the kidney. It is a relatively common condition that affects about four times more men than women.

Kidney stones are most commonly caused by too much calcium being absorbed from food, which is then excreted into the urine or kidneys leaking excess calcium into the urine.

Once the stone has passed, steps must be taken to prevent another stone forming. This depends on how the stone formed it the first place. Drinking plenty of fluids (2 to 3 litres per day), eating a low calcium diet and avoiding foods such as rhubarb, spinach, nuts, tea and coffee can control excess calcium in the urine.